The concept of Carbon TyrePrint is to allow users to track a journey they take by car, using the GPS and other Location Services provided by Windows Phone and Bing Maps.

The application then analyses this journey, and calculates a number of metrics. The first is the estimated carbon emissions of the trip, but we also provide the estimated carbon emissions of the same trip, had it been made via the most efficient method of public transport. Finally, we provide information to the user about the public transit route they could have taken in order to complete this journey at that time. For example, should a user drive from London to Newcastle, arriving at 10am, the application will provide instructions to complete the journey using the closest public transit connections, such as bus and rail, that were available at that specific time.

The aim is therefore educate users about their carbon emissions, and use the app as a tool to suggest ways to reduce them with the least friction possible.

Out of over 600 entries, Carbon TyrePrint was selected as one of 12 Irish Finalists, along with the eventual worldwide winners Team Hermes, and the team was invited to spend 2 days at the Microsoft offices in Dublin, where we presented the application to a panel and fielded questions on the implementation of and the business plan for the application. This business plan also won the ‘Best Green Business Idea’ award and cash prize at the 3rd Annual Queen's Students' Union Business Idea Awards.

An early version of the application is live on the Windows Phone Marketplace, and has to date received only 5-star reviews from users. Plans for the future include adding an iOS version, Facebook and Twitter integration, a web application to allow data aggregation and graphing, and improvements to our analysis algorithms, including the option to input vehicle information to allow more accurate data to be achieved. 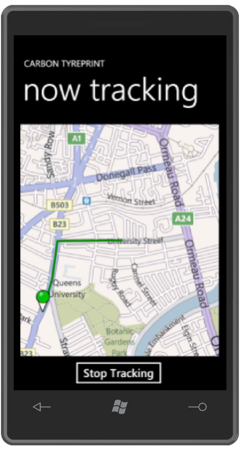 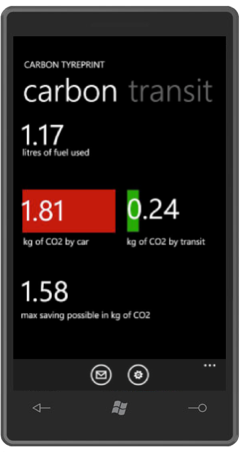